Please remind me why all of this Transport Infrastructure is good for us?

In this updated article I’ve supplemented the 2012 charts sourced from the Information Sheet with more recently published material.

The analysis outlines a positive link between investment in the right transport infrastructure, and benefits as commonly measured by economists (ie. improved Productivity, being increased economic output generated by similar labour and capital inputs).

What also needs to be considered though is the – more controversial – link between improved Productivity and enhanced community benefits. In evaluating this concept, we need to take account of the reality of changing community needs and expectations. This is a particularly topical issue, as major shifts in community behaviour are disrupting travel demand in these volatile times borne of COVID-19.

Why is productivity important?

From an economic standpoint, improved productivity is a commonly accepted long-term underlying driver of economic growth. In broad terms and as illustrated in the simplified diagram below, the effect of productivity improvement on overall economic growth is relatively stable ie. it does not fluctuate much over time. In comparison, the effect of credit on economies is relatively volatile, typically playing out as recurring growth (borrowing) periods followed by a recessionary (pay-back) periods over a 5-to-7-year cycle. 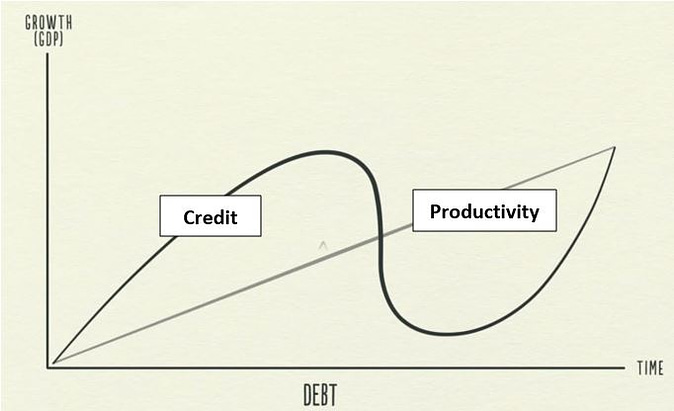 Productivity improvement matters not for its own sake, but because the consequential growth it can generate results in the higher incomes and government revenues needed to raise living standards. Or stated another way, increased productivity in turn improves community welfare, rectifies disadvantage and enables economies to maintain global competitiveness over the longer term.

However, economic growth is also affected by additional elements such as fluctuations in terms of trade and worker participation rates. As illustrated in the chart below, a declining trend in Australia’s terms of trade since 2009-10 (which in turn is linked with the cessation of Australia’s “mining boom” and associated reductions in commodities prices) as well as general ageing of the population have worked against growth in incomes over the period since 2009-10. Expectations are that improving productivity will need to provide the “heavy lifting” over the foreseeable future in maintaining and enhancing living standards for Australians. 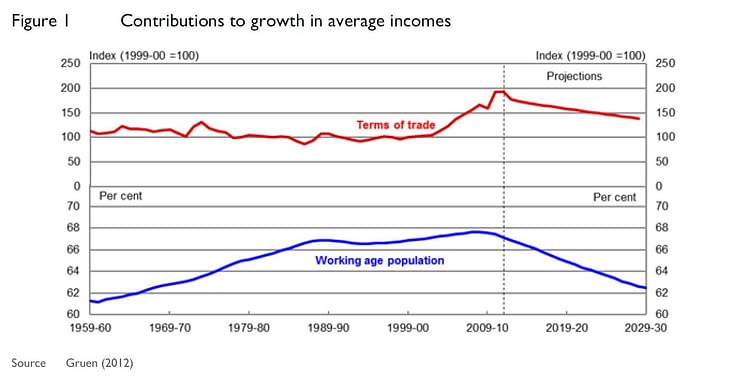 What specifically is Productivity?

Productivity is the efficiency of transforming inputs (capital and labour) into outputs (goods and services). The two main measures of overall productivity employed by statisticians are:

When interpreting productivity trends, it’s important to distinguish these productivity concepts from the measured productivity indices (eg. reported changes in Gross Domestic Product (GDP)). Whilst productivity statistics aim to measure technical progress or changes in the efficiency of production, in practice they measure the volume of outputs versus inputs. This gives rise to measurement limitations including being affected – at least in the short term – by fluctuations in external factors such as weather, changes in capacity utilisation and population growth due to immigration.

What is Australia’s productivity trend?

As illustrated below, multi-factor productivity growth grew rapidly in the 1990s up until 2003-04 and has declined since 2007-08. The strong growth in incomes in the 2000s was fundamentally driven by rising terms of trade. From March 2004, the mining boom boosted Australia’s terms of trade improved by almost 50% up to and beyond the Global Financial Crisis (GFC) in 2007-08. Decline in terms of trade post the GFC (most recently weighed upon by COVID-19’s disruptive effects on global supply chains as well as trade disputes with China) is expected to exert negative pressure on average income growth. 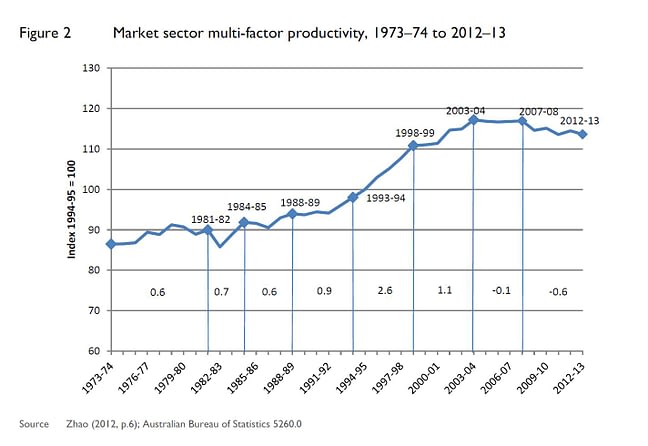 The more recent chart below bears this out, with both labour and multi-factor productivity growth rates (whilst fluctuating year-to-year) trending downwards since FY2012. 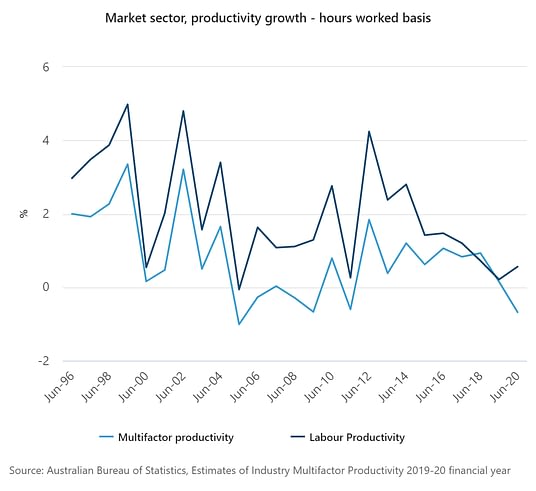 How does Transport Infrastructure Investment contribute to overall Productivity?

As illustrated by the charts below, declining overall productivity has coincided with a significant increase in Private and Public Sector capital investment in the transport sector. 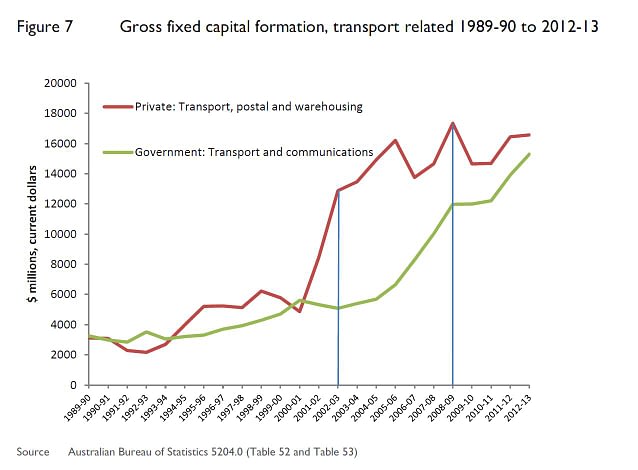 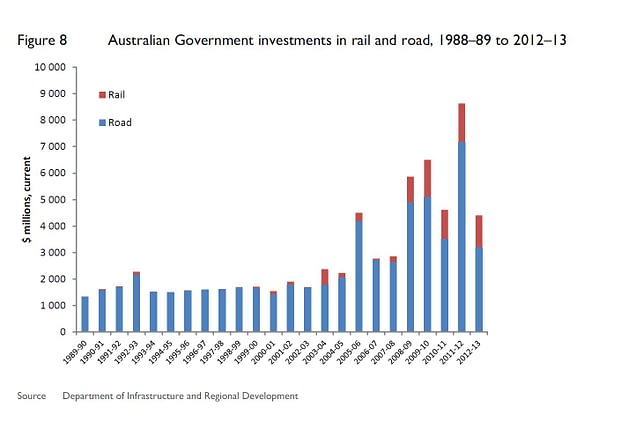 Investment post 2012-13 dipped in the period (roughly) from 2015-2017, which coincides with the cessation of the mining boom. The charts immediately below illustrate a strong subsequent rebound in Government investment in major Transport infrastructure and Private sector investment in Transport, Postal and Warehousing respectively. 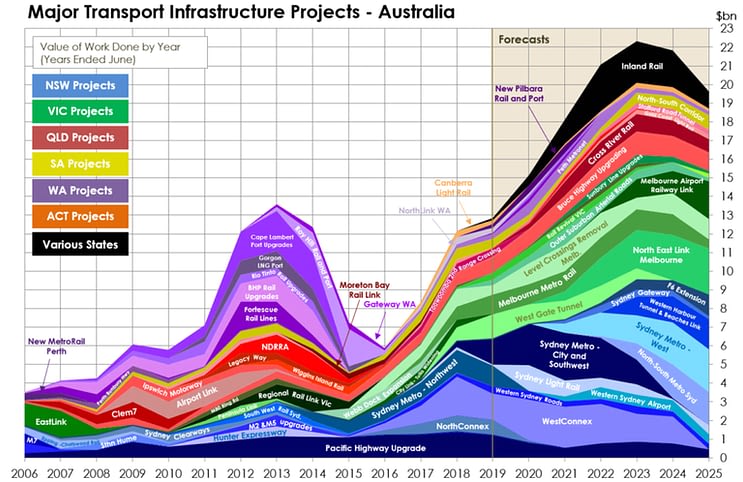 How important is it to build the Right Infrastructure?

The specific nature of the link between public infrastructure spending and productivity growth has been widely debated. However, it is generally accepted that transport investment with a positive Benefit Cost Ratio (BCR) that appropriately considers environmental effects boosts an economy’s multi-factor productivity.

The benefits of much of the visible investment in roads, rail and enabling infrastructure across Australia over the last 5 years in particular have been all about reducing travel congestion and improving the workability and liveability of our major cities.

It is worth digressing at this point to consider that not all beneficial transport investment needs to be in “visible” infrastructure.

Ross Gittins in his Sydney Morning Herald article of 1 September 2014 “How Econocrats can lift their Game” highlighted technological investment as an effective enabler of improvement, particularly if productivity is thought of as “technological progress” as a means of generating improvements in welfare of the population.

Pursuit of the economies of agglomeration across Australia has resulted in vast numbers of the population clinging to urban areas on the coastal edges of the country, with resultant urban congestion, compromised open spaces and loss of amenity. Technological improvements can mitigate the effects of these policies and overcome the natural disadvantages of the vast distances across Australia between urban centres. In this way, Government can adopt the role of micro-economic reformer, targeting the way that our cities are organised and operate.

There is a plethora of technologies that can be utilised. A particularly noteworthy transport management related example is SCATS (Sydney Co-ordinated Adaptive Traffic System), a system originally developed in Australia over 40 years ago to control traffic light phasing and optimise traffic flow. A range of additional technologies are being brought to bear on the negative effects of traffic congestion, including real-time public transport information flow, variable time tolling of major urban roads and automated parking monitoring and infringement issuing systems.

A particularly topical case study highlighting the link between technology and productivity concerns the recently-completed National Broadband Network (NBN) rollout. As chance would have it, finalisation of this long-awaited project coincided with an abrupt COVID-19 borne shift in travel demand. It remains to be seen whether temporary “work from home” arrangements and – in some cases – relocation to Regional locations morphs into a permanent re-set of working arrangements. It is clear though that this shift could not have occurred in the absence of the increased network capacity of NBN, without a major negative effect on business productivity.

What are the challenges in delivering the Right Infrastructure Projects?

One of the ongoing effects of COVID-19 is becoming apparent with major alterations in travel demand. Closed International borders have resulted in stalled migration, effectively halting worker-age population increases in the major cities across Australia. At the same time, plummeting use of Public Transport systems has shifted demand to urban roads and workday road trips have morphed into school drop-offs and pick-ups.

As the “new norm” of our working lives becomes more evident, community concerns will inevitably be raised regarding the appropriateness of the transport infrastructure projects in the pipeline (and maybe questions raised regarding those currently under construction?).

These concerns will be fuelled by the daily inconveniences associated with the plethora of projects still under construction at the same time, borne of what feels like an ancient era of chasing skyrocketing transport demand. Added to which is a more fundamental distrust of the “reality” of productivity and the extent to which the associated economic benefits are shared across our community.

Sounds like an important debate for Government to take the lead on, would you agree?

Previous Post
When and How is it Best to Use Consultants?
Next Post
Integrity Revisited: How Trust contributes to Project Performance